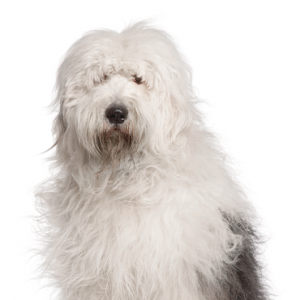 The origins of the old English sheepdog can be traced back to 19th-century England. Although some people believe it has connections with the Russian owtchar dog while others have said that it is better connected to the Scottish bearded collie.

For this reason, to further prove their working status, their owners had to dock their tails. The old English sheepdog found its way to America through a man named Wm. Wade in the 1880s. By the turn of the century, five out of the ten richest families in America were already breeding and showing the old English sheepdog.

The old English sheepdog is a social dog and so it requires a fair level of weekly exercise. When it is still a puppy, it is advisable to allow it to exercise a lot. But as it grows older, it slowly becomes less interested in exercising and moving about.

If it isn’t brushed regularly, the dog will have lots of debris on its coat. The dogs’ coat also grows very long and may need to be trimmed down every now and then. Another important grooming practice is to take care of the mouth area. From regular brushing to good hygienic practices.

This is because the old English sheepdog drools a lot. This drooling might end up staining the dogs’ coat and turning it yellow if not well taken care of.

The unregulated breeders who are selling outside of the USDA regulations and without a license are what we consider to be “Puppy Mills.” We are committed to offering Old English Sheepdog puppies who will grow up to become important members of your family. We only purchase puppies from the very best sources, and we stand behind every puppy we sell.

It is referred to as high maintenance because of its long coat that needs lots of care.

Except when it is brushed, it doesn’t shed.

The average size of an old English sheepdog is 46kg.

The life expectancy of this dog lies somewhere between 10 to 12 years.

The old English sheepdog can grow as tall as 11 inches in its lifetime.

The recommended daily amount of food for an old English sheepdog is 4 to 5 cups of high-quality dry dog food daily.

Because of its coat, the old English sheepdog doesn’t thrive well in hot regions.

Yes. they absolutely love children. Because of their natural herding instincts, they may end up trying to herd your kids too.

The old English sheepdog is amazing once you get past the task of taking care of its coat. It is one of those dogs that would stay dedicated to caring for every member of the family.

Are you interested in purchasing a Old English Sheepdog?