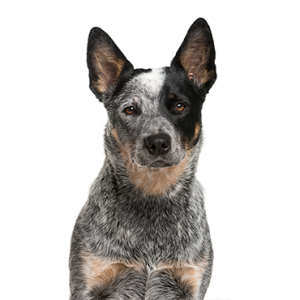 When it comes to qualities like sturdiness, resilience, hard work and intelligence, the Australian Cattle Dog is a breed that’s got it all. As its name implies, this dog breed was developed in Australia to help farmers manage their cattle herds which it did remarkably. This breed isn’t particularly small and it isn’t large either, it’s more of average-sized but this doesn’t hinder its capabilities as a cattle herder. They are very energetic and even independent, although they can be trained as a family pet as they have experience with different species of children. Discover more about our Australian Cattle Dog puppies for sale below!

The Australian Cattle Dog is a generally protective breed. They love to mark their territory, especially around strangers. They are reserved but not unfriendly and they show maximum devotion to their owners. They’re likely to trot around their owners and take do not take physical separation from them too well. Although they’re known to be very smart, they can display stubborn traits every now and then, hence they require a firm trainer to rid them of these independence tendencies. They are very sensitive dog breeds too. They feel every mood their owner is in. The Australian Cattle Dog is that which owners will need to constantly engage as they can be destructive when bored. They can be mouthy breeds and can chew furniture when left unattended. Apart from these downsides, the most important temperament is that the Australian Cattle Dog is great with children.

The Australian Cattle Dog has the freedom associated with farmlands imprinted on its DNA, hence, apartment building may not be the best option for this breed as they do not adapt so well to it. Novice owners will likely have a hard time with this breed, however, they do have a great tolerance for different types of weather conditions. With respect to housing, this dog can do well in the yard, provided it is fenced to prevent them from wandering. They love open spaces hence taking off their leash when they’re at the park will be a high point for them. Bring a Frisbee and teach him how to fetch.

The Australian Cattle Dog loves a great workout. They have a firm build and these exercises help maintain its physique. They are very easy to train hence taking them on jogs or walks would be easy. Their ancestors herded cattle by running after them and nipping them to prevent them from going to certain areas. This rush is in their DNA and they require maximum exercise to keep them engaged and tired as they return. In the absence of exercise, they are known to be destructive or independent. Their energy level is high, they require intense workouts and they are very playful meaning they can go on and on. With the amount of exercise this breed requires, it’s best a fitness junkie, an active individual or a family with kids adopt him.

The Australian Cattle Dog actually has two coats. Its outer coat is weather resistant while its inner coat prevents it from bruising. This breed has a short and straight coat but it doesn’t shed all year, it however blows. This means that rather than lose yarns of fur it loses clumps of it. However, this breed needs to be brushed weekly to expunge dirt from its coats. Bathing should be done periodically, only when he’s obviously dirty or smelly.

The Australian Cattle Dog’s teeth should be brushed thrice a week. This is done to prevent bad breath, gum disease, tartar accumulation and bacteria formation inside its mouth. Nail trimming should be done carefully as the dog’s nails have blood vessels and will bleed when punctured. When grooming this breed do check for lumps, sores, redness, inflammation or rashes as early detection could prevent dire health challenges.

The unregulated breeders who are selling outside of the USDA regulations and without a license are what we consider to be “Puppy Mills.” We are committed to offering Australian Cattle Dog puppies who will grow up to become important members of your family. We only purchase puppies from the very best sources, and we stand behind every puppy we sell.

Depending on the size of the dog, twice a day should suffice.

The average life expectancy of the Australian Cattle Dog is 11-15 years.

This breed is very sensitive and eager which makes its training easier.

Not particularly. However, they lose clumps of fur once or twice a year.

This breed belongs to the herding group.

Yes. This breed is a perfect fit for a large family.

Yes. The Australian Cattle Dog has a firm and plump build hence they have great tendencies to put on some weight.

It could be blue or red.

Deafness is an inherited condition for this breed.

Are you interested in purchasing a Australian Cattle Dog?